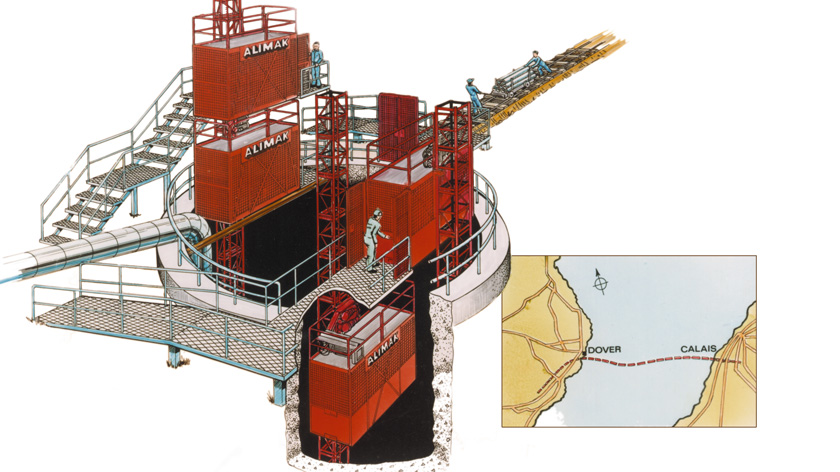 In 1989 Alimak supplied three special construction hoists, to solve the access difficulties in the ventilation shaft during the construction of the Channel Tunnel. The 50.5 km undersea rail tunnel links Folkestone, Kent in England with Calais in Northern France.

The adjacent photo, shows the special construction hoists that were designed by Alimak to meet the high density traffic requirements feeding men and materials down the 9 metre diameter, 100 metre deep shaft from the surface, to the service tunnel face workings on the Channel Tunnel. The logistics involved in the movement of men and materials down the ventilation shaft were described by the user as “enormous”. A 24-hour per day operation was serviced by a three shift system with at first 700 men, increasing to 1200 men, all transported in the hoists. Three Alimak hoists were installed to meet these requirements. In March 1989 Alimak were requested to provide a vertical handling system that would move the total number of men at each shift change. The method developed by Alimak was to provide a double Deck Alimak Scando 20/30 — operating at 28 metres per minute and two Alimak Scando Super 28/37 C units operating at 96 metres per minute. This system gave the flexibility needed by the client, as the total man carrying capacity per journey for the three units was 106. The double deck car was able to discharge both units simultaneously using split landing arrangements at both levels in the shaft. Also available was a total goods carrying capacity of 8.8 tonnes.

During the first 4 months of operation these units recorded over 7800 running hours.In that period the cages had “clocked up” a total of 4100 km’s over 25,000 cycles. The client carried out standard maintenance procedures on a weekly schedule (4 hours each Saturday morning), and this ensured the reliability and availability of the equipment. Alimak backed up the units by providing 24-hour call out for breakdown cover.

The three hoists were in continuous operation apartfrom these periods of service shut-down, and allowing for a 90 second load/unload cycle, the combined travelling distance of the three hoists were conservatively estimated at 65,000 km’s each year — well in excess of the usual maximum travelling distance of construction hoist equipment. The double deck hoist was specially developed to suit this application and to give the high density traffic movements required.