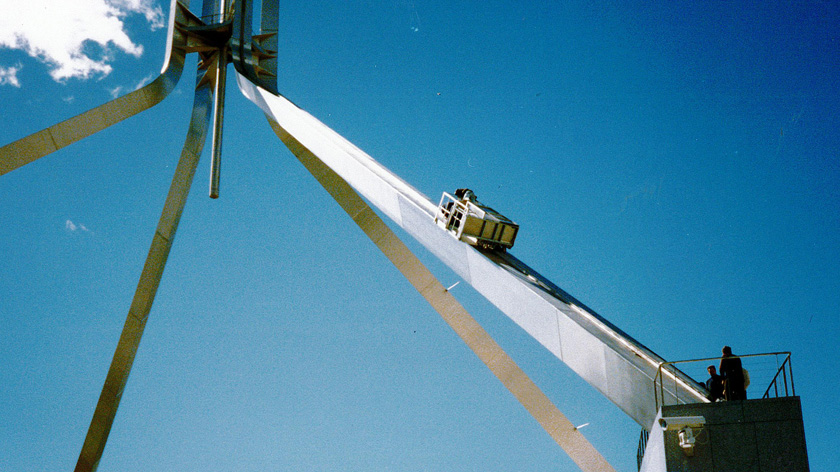 In celebration of 25 years of service, Alimak looks back on one of the largest and most unique projects the company has undertaken worldwide, and the contribution Alimak has made to one of the Australia’s most recognisable structures.

In 1986, Alimak designed, manufactured and installed two industrial elevators on one of Australia’s most iconic and historical buildings.

In 1978 Prime Minister Malcolm Fraser unveiled plans to build a new Parliament House in celebration of Australia’s 200th birthday. Designed by Mitchell/Giurgola & Thorp Architects, the new Parliament House would feature six times the floor space of the original structure, accommodating more than 5,000 people. When construction began in 1981 it was the most expensive building in the world, valued at an estimated AUS $1.1 billion.

Opened by Queen Elizabeth II on 9 May 1988, the unveiling of the new Parliament House coincided with a celebration of 200 years of European settlement and the anniversary of the opening of the First Federal Parliament in Melbourne on May 9, 1901.

The shape of the building aligns with the land axis designed by architect Walter Burley Griffin in his original master plan for Canberra. The walls curve out to form the start of the Parliamentary Triangle, while an 81 metre stainless steel flagpole, anchored to four bow-formed steel legs, sits atop the central building.

As a visual focus point and stunning centrepiece, the flagmast was comprised of 220 tonnes of Newcastle stainless steel, raising a 25kg Australian flag, half the size of a tennis court.

The flagpole itself was designed to be completely illuminated at night by an intricate series of timed lighting fixtures contained within the flagpole’s ‘cluster’; the point at which the four stainless steel legs meet, giving support to the 81m flagpole. Also contained within this ‘cluster’ is the platform from which the flag may be fastened and detached from the flag pole halyard. During the design phase of the new Parliament House the question arose, if something were to go wrong with the lighting or mechanical winching systems, how would anyone gain access to the flagpole for maintenance or repairs? Alimak consultants provided the perfect solution.

Preserving the ‘clean lines’ of the structure

In 1985 Alimak was awarded the contract for the design, manufacture and installation of two specially designed rack and pinion industrial elevators. Alimak worked closely with project architects and managers on the design, engineering and aesthetics of incorporating the two rack and pinion elevators into the flagpole structure. In order to preserve the visual impact of the new Parliament House, it was essential that the flagmast have clean lines and not be visually disturbed by the intrusion of the elevators. To achieve this, Alimak engineers designed a unique stainless-steel rack which could be bolted directly onto the stainless steel leg, without the use of a mast. In this way, the rack was hidden from public view, camouflaged against the flag mast leg.

This complex new rack system required the use of a soft bronze pinion to run on the hardened stainless steel rack, in place of the standard improved-capacity steel pinion. The benefits of using a bronze pinion were threefold: The pinion would contain wear of the elevator to a single component enclosed within the gearbox, instead of wear to the entire 81m of rack; it would allow the elevator to operate without the need of lubricants, avoiding any potential ‘staining’ of the stainless steel flagpole leg; and it minimised movement of the elevator car on the rack and reduced operational noise.

To preserve the aesthetic feel of the building, each elevator was painted to match the satin finish of the stainless steel flagpole, and was designed to be parked behind a recess of the building. The result of this was that both elevators would remain hidden from the public view when not in use, and cosmetically, the façade of the building would remain unchanged. The two units were designed and manufactured in Sweden, in compliance with both Swedish National Standards and Australian Standards, and arrived on site at Parliament House in October 1986.

Alimak’s unique solution to the challenge at Parliament House was a dual elevator concept: one elevator to travel the 61m up the southeast flagmast leg, at a 40° inclination, to the first landing platform, and a second elevator to continue the additional 24m to the apex of the tapered flagpole.

The upper elevator, with a capacity of 100kg, is equipped to carry a single person the additional 24m to the very top of the flagpole, allowing personnel to reach the external ropes, pulley system and the hoisted flag, should the winch system fail or the sheaves require replacing.

Alimak’s two galvanised steel elevators arrived on site at Parliament House in October of 1986, and were fully installed and operational by May of 1987. The installation occurred in stages, the first of which involved much of the rack being systematically bolted to the stainless steel support leg, as the flagpole structure was being erected. The second stage involved the remaining 75kg lengths of rack being manhandled into the lower elevator, driven up to the correct position, winched through the roof trap door, and bolted into place. The curved 150kg section of rail, which was to negotiate the 40° incline of the flagpole leg, was manoeuvred into place with use of the on-site tower crane. Given the triangular shape of the support leg, and variations in the metal, stainless steel shims were fixed to the structure to ensure the rack would remain perfectly level when bolted into position.

The two Alimak rack and pinion elevators have remained in operation at Parliament House for 25 years, servicing the central flagpole from which the Australian flag flies.

Alimak’s unique rack and pinion system enabled the elevator to negotiate the sharp curve of the leg, shifting from a near horizontal 40° angle to vertical upright along the same rack. Alimak safety devices, centrifugal brakes and automatic lowering systems allow both elevators to be lowered by gravity at a controlled speed in the case of an unexpected power supply problem.

The flag, measuring 12.8 m x 6.4 m, is changed every four to six weeks due to weather damage and requires three personnel to carry out the change-over. A single person must operate the hand winching system located on the NorthEast wall of the structure in order to lower the flag to the second landing platform. While this occurs, two personnel must use the lower Alimak elevator to travel the 61m to the second landing platform in order to physically detach and replace the flag. The flag may then be raised once more, using the winching system operated from the ground.

Since the installation of the two rack and pinion elevators in 1987, Alimak has completed services on both elevators every four years to ensure the exchange of safety devices and perform drop tests. Routine service and maintenance of the flagpole, elevators and winching system is conducted by Parliament House’s own DPS Mechanical Services staff. In 1990 a minor refurbishment was completed on the lower elevator in order to replace a gear box and centrifugal brake assembly. Given the location of the elevator, and the difficulties in gaining access to the flagpole structure, an Australian Army helicopter was enlisted to hoist the 50kg gear box from the elevator car, and transport it to a nearby maintenance vehicle. The gearbox was then transported to a workshop for refurbishment, and replaced once more with the help of a helicopter.

The two Alimak rack and pinion elevators have remained in operation at Parliament House for 25 years, servicing the central flagpole from which the Australian flag flies. The unique nature of the project, coupled with the engineering and design challenges involved, has made this one of the largest projects completed by Alimak worldwide. 25 years on, Alimak celebrates one of its proudest achievements and the contribution made to one of Australia’s most iconic structures.